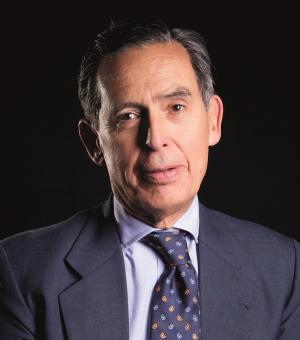 Carlos Caballero ArgáezI was a CAF- Oxford Visiting Fellow at the Latin American Center in The University of Oxford during the Michaelmas Term 2014. He has been concerned with the fact that in 1990/91, during the presidential period in Colombia of Cesar Gaviria a programme to open the Colombian economy and, specifically, of the foreign trade barriers, was undertaken, it happens that the Colombian economy continues to be today one of the closest in Latin American, at the time in which the country has become a member of the “Alianza del Pacifico” with Mexico, Peru and Chile.

During his time at the Latin American centre,  he wriote the first version of a paper on the “apertura” of Colombia 25 years later, which he presented in the LAC Seminar on November 28, 2014. He had close contact in the LAC with Professor Diego Sanchez and with the Aaron Watanabe, a Master´s student, who performed very efficiently as a research assistant. As a result of this work Professor Sanchez and Carlos were in the process of organizing a seminar to be held in Bogotá in the second semester of 2014/15, with the purpose of comparing the economic opening experiences of a group of countries in Latin America and analyze the factors which have determined its success in terms of innovation and increase of exports.

The Latin American Centre personal experience included a range of activities. In the History Seminar he presented a book he had recently finished in Colombia on the relationship between Presidents John F. Kennedy of the U.S. and Alberto Lleras of Colombia regarding the launching of the Alliance for Progress in 1961, the way the Cuban question was dealt with and the role played by the Organisation of American States, OAS. IHe attended most of the Seminars offered at LAC during the Term and also have the time to establish contacts with other Colleges and Schools in Oxford and to attend their Seminars., including the Blavatnik School of Government, its Director and Vice Dean and their master´s and doctoral students.