Hannah Brown and Sabrina Escobar Miranda, masters’ students at the LAC talked with the former president of Brazil about his book with Enzo Faletto, Dependency and Development, and about the current crises of democracy in the world. 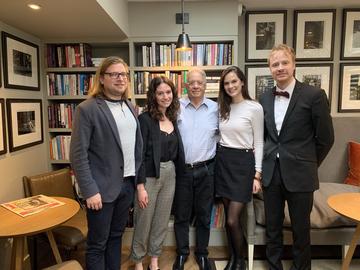 The former president of Brazil Fernando Henrique Cardoso sat patiently on the Nissan Lecture Theatre stage, looking out at the audience of eager faces waiting to hear his keynote speech on 26 November. The last time he visited Oxford was 17 years ago, when his second term as the President of Brazil was drawing to a close, Lord Christopher Patten, University Chancellor, recalled in his introduction. Since then, Lord Patten said, some have called him the best president Brazil has had, helping to stabilise an economy rife with hyperinflation and consolidate democracy in the wake of years of military dictatorship. That day, however, the Latin American Centre was not commemorating his time as a politician, but rather his illustrious career as a sociologist, epitomised in his book, "Dependency and Development in Latin America.”

President Cardoso's speech was the inaugural lecture of the OSGA Global Forum series, and the keystone of a day-long conference called "50 Years of Dependency and Development: Global Perspectives.” The conference, co-hosted by the Latin American Centre, the Contemporary South Asian Programme, OSGA, and the Global History of Capitalism Project at the History faculty, that brought together international scholars from multiple disciplines, departments and universities to analyse the impacts of President Cardoso’s book.

“Always when there are discussions, or celebrations, about my work, I’m happy of course,” President Cardoso said in an interview with Horizontes after the event. “To me, it’s a surprise the extent to which this book has been so influential across all these different countries in the world.”

When President Cardoso’s book was published, it was immediately perceived as dependista literature, but President Cardoso said he felt that this interpretation was over-simplified. His intention was to challenge the simplicity of the theory of imperialism and its tendency to generalise development across the entire Latin American region, he said. He determined that in many countries, the international influence of democracy and the beginning of globalisation created a pattern of development with dependency.

Today, globalisation has contributed to a series of democratic crises around the world, President Cardoso said. “Globalisation is at the root of the global crises of political legitimacy undermining representative democracy,” he said. President Cardoso quickly clarified that he was not against globalisation, but that institutions need to recognise its consequences. From Europe to Latin America, the world is undergoing a broader political metamorphosis, President Cardoso pointed out. Political participation has decreased, he noted, as citizens’ distrust of politicians, the media, academics and institutions increase. The xenophobia, nationalism and populism that have arisen as a response are the necessary ingredients for a “perfect political storm.” In his hour-long speech, he tried to answer the question puzzling politicians and scholars: is there a “method to this madness”?

In his opinion, there most definitely is.

“Democracy is devoid of meaning for the growing number of people who feel, who have lost control over their personal lives and the fate of their country,” President Cardoso said.

People have increasingly felt a disconnect between themselves and their elected politicians — a disconnect that has been exacerbated by the rise of communication technology, he continued. The former president criticised political parties’ inability to adapt to society’s new interconnectedness, making the established political system seem out-of-date, out-of-touch and incapable of addressing people’s new aspirations.

Society is at a crossroads, President Cardoso observed, but the outlook is not as bleak as it appears. In countries like Hong Kong and Beirut, voters have rejected well-established autocrats in favor of democracy. In Europe, many people who do not usually vote headed to the polls in recent elections. In his view, the new spaces created by globalisation are a call to reinvent representative democracy by adding the elements of participatory democracy fomented by new communication systems. Governments need to build strong institutions that safeguard democracy – capable institutions that are efficient and count on people’s trust and support.

“Democracy is not forever,” he said. “We have to cultivate democracy. Every day, we have to insist on democracy.”

Horizontes sat down with Cardoso the day after his lecture. What was particularly striking was his capacity to cover such a wide range of topics and offering insight on even the most difficult questions for a former President to answer. “Since I was young, I was trained to answer questions, and the important thing is to say what you believe and how you see the situation. As I’m 88, I have no worries about this, and I can say what I please! Of course, one has to be careful -- my role is not to criticise the President abroad, I do that enough at home.”

He laughed as we he begins to tell us more about the current state of Brazilian politics. “It was a mistake to vote for Bolsonaro, it was on grounds of fear. Fear of high levels of insecurity and of PT. Bolsonaro appealed to a sense of order, and many allied with him on this.” We enquire more about his opinion on the increasing concern of the role of the military in domestic politics; Cardoso elaborates: “the army voted for Bolsonaro because they saw him as the lesser of two evils, there was no other candidate capable of acting in their interests. Their wages have increased and of course, it’s comfortable for them to be so closely aligned with the political system, they believe they are the priests of the country and he [Bolsonaro] only reinforces this. They’re extremely bureaucratic though, they hate wars, they’re not prone to corruption. Up until now they are not encouraging authoritarianism as before.”

Perhaps a greater concern for Cardoso seems to be the way in which Evangelicalism is increasingly influencing Brazilian politics.  He laments as he talks about the Brazilian foreign minister, Ernesto Araújo: “He’s crazy, he’s a fanatic.” A crazy man. “Crazy men” seems to be a reoccurring theme in our conversation with President Cardoso about contemporary Brazilian politics. “He [Araújo] believes he’s a warrior of God and he wants us to blindly side with the US on everything. Not only this, but the next generation of young people is so susceptible to the influence of evangelical figures who promote their messages through social media. The young people do not read the newspapers anymore, so they are especially influenced by this new force in Brazilian politics,” he responds when we ask him whether his views on the damaging impact of social media on democracy will change with the upcoming generation of those who do not know a life without social media. What especially seemed to worry Cardoso is how issues of poverty and inequality can exacerbate the threat that such figures as President Bolsonaro can pose to democracy, as the gap between the rich and poor is growing, and people become increasingly desperate to find a solution to domestic issues. For Cardoso, this is a worry not only about how this will impact Brazil but also democracies globally.

He offers some optimism however, on issues such as environmentalism: “We have to listen to the young people. The young people are very active, look at how they campaign for environmentalism, politicians will listen to them eventually if they continue to push for what they care about.  They need to find a way to convince them that it is more profitable to preserve it than cut it down.  The biggest issue is the discourse around the Amazon, that is the most serious mistake of the government”

It is clear that Cardoso does not have a fatalistic vision for the future of democracy: “it’s about the people because in the end they [politicians] will always follow the people, the most important action everywhere and not only for Brazil is to inform the people because no political leaders know anything about anything: “Trust me I was one of them!” he laughs. It seems that for Cardoso, if people were able to escape their apathy and campaign for politicians to be more active, there is hope for a future that is different from the current wave of political tumultuousness that we seem unable to escape at the present moment. “The more that the middle classes are growing, the more press coverage, the more information, it will become better” he insists.