The LAC’s doctoral recognised students offer a summary of our Brazilian Studies Programme annual conference, which focused on the topic of informality

In keeping with the Latin American Centre’s yearly tradition, the Brazilian Studies Programme Conference took place on 7th February, organised by Dr. Andreza A de Souza Santos. Informality was the key theme of a full day of activities, consisting of five interdisciplinary panels with Q&A sessions for the ever intrigued room of social scientists, historians and jurists. Each panel brought different approaches to the examination of the topic, from theoretical discussions, to anthropological narratives and empirical data analysis, all united by having Brazil as the main case study. The Conference attratced more than 100 attendees, a packed room to close the 2020 Oxford Brazil Week. 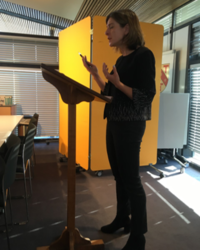 The keynote speaker, who opened the conference, was the historian Brodwyn Fischer (University of Chicago). Her immediate question was “Does informality have a history?” The history of informal cities, she said, is entwined with the history of inequality and social movements, and it’s still largely uncovered by the literature. Through an exploration of a series of historical documents, mainly on Rio de Janeiro’s and Recife’s poor communities (favelas), Professor Fischer argued how informality exists due to the tension between public and private spheres that shapes the whole of Brazil’s history, since it preserves the power of individuals in all levels of society. It certainly gave food for thought. 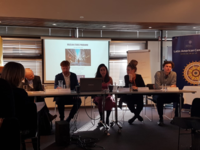 The speakers in Panel 1, “The place of informality: locating informal practices in growing cities and shrinking economies”, brought ethnographical insights to reflect on informality, regulation, and State violence in the outskirts of different Brazilian cities. Andreza A. de Souza Santos (University of Oxford) described the competition (and envy) among people working in the informal sector in Ouro Preto, a historical city that “belongs to those who don’t belong to it”, in the sense that tourists and students coming from elsewhere get the best of it while underprivileged locals can only afford to live in peripheral areas. Though repeating ‘us vs. others’ (in-group and out-group) narratives, when looking within the group of residents, envy marks a tight relationship in a competitive informal economic system. Martijn Oosterbaan (University of Utrecht), discussed his research in the favela complex called “Complexo da Maré”, in Rio de Janeiro, posed a reflection on space, “ghostly” and “hybrid” sovereignty, and political dynamics in a territory where presence and absence of State power alternate: “the State portrays itself as a way of equalizing space, but it hierarchizes it instead”. Marie Kolling (DIIS) described an informal way of accessing credit in the peripheral area of Salvador known as “name lending”, in which people with “clean names” (meaning: access to credit) lend credit cards to friends, relatives, and neighbours, acquiring debts they hope will get paid in time (lest they also end up with a “dirty name”). Martijn Koster (Radboud University), drawing from his fieldwork at Ocupa Estelita, proposed a framework for reflecting on precariousness, trying to come up with an understanding of popular politics that go beyond the opposition between the “defiance approach” and a “critical theory” that cherry-picks anti-system practices: popular politics do not necessarily defy or contest formal politics, but instead engage with them in unforeseeable ways. 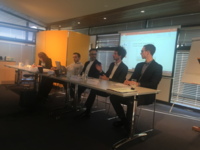 For panel 2, “Imagining justice: selective punishments and omissions”, we had Corentin Cohen (Sciences Po/CERI) introducing the justice system of the Brazilian armed group Primeiro Comando da Capital (PCC), created as a counter-state alliance to resist against human rights violations within the penitentiary system. The so-called “Tribunal Popular” follows PCC’s tenets of “equality”, in which all “brothers” are accountable and life should be preserved - both from attacks from other “brothers”, the State, or unfair rulings. Through an analysis of interviews and archival research, Jacob Blanc (University of Edinburgh) uncovered the history of Itaipu Binational Corporation as an example of military dictatorship’s policy against rights of access to land and the livelihoods of rural and indigenous people, describing how the movements for land rights at that particular setting enabled the emergence of the Movimento dos Trabalhadores Rurais Sem Terra (MST). Octavio Ferraz (KCL) discussed the increasing understanding of access to health services as a human right and the “judicialization” of health in Brazil, showing how a combination of chronic underfunding of the Brazilian health system (SUS) and the demand for specialized treatments through civil appeals to Justice can result in an even more unequal access to health. Ezequiel Gonzales Ocantos (University of Oxford) presented a comparative analysis from the results of focus groups conducted in Peru and Brazil concerning public perceptions of the Lava Jato (Car Wash) operation and its impact in fighting corrupt practices by political actors in both countries. 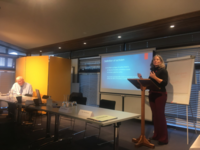 Panel 3, “Politics and self-censorship”, started with Mariana Borges (University of Oxford) presenting the gains of ethnography and historical analyses, as an inventive methodological approach for political science, to understand the political preferences focusing on the voter’s choice. Bruno Bolognesi (UFPR) presented his research about right-wing political parties in Argentina, Brazil, and Chile, using a comparative study on party systems to search for similitudes among them. Rebecca Abers (UnB) broke through the analyses of activism and policymaking, demonstrating that is possible to have activism inside bureaucracies. And to finish this session, Alex Shankland (IDS) presented democratic strategies of indigenous peoples claiming for government policies.

The Annual Conference ended with a round-table entitled “Informality in a changing political-economic system in Brazil” moderated by Andreza A de Souza Santos. Flavia Biroli (University of Brasilia) showed how informal labour in the domestic realm is under-paid or not paid at all and women mainly occupy informal-domestic-labour positions. Mariana Batista (Federal University of Pernambuco) demonstrated how consistent evangelical voters and parties are when it comes to the drafting of conservative bills or the vetoing of progressive ones, which may ultimately naturalize the positions explained by Flavia. Gabriel Ulyssea (University of Oxford) brought data that showed the impact of the growing numbers of informal companies on the Brazilian economy and on the levels of disparity in the country’s labour market; he also mentioned the informality trap, when those in the informal sector may fail to return to formal labour markets. Timothy Power (University of Oxford) showed that though informality is a very important topic in Brazil, it is hardly represented in the congresss. According to Gabriel, the heterogeneity and invisibility of informality may preclude its political capital.