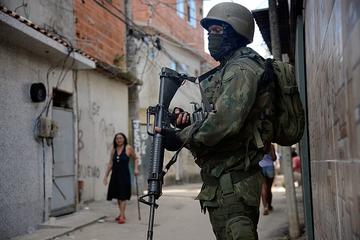 The Latin American Centre of the University of Oxford and the Institute for Latin American Studies of the Freie Universität Berlin have successfully applied for a seed grant of the Oxford/Berlin Research Partnership. In a first collaborative workshop in Berlin (February 2020), the research team will kick-off the new project that aims to bring together researchers of different disciplinary backgrounds in order to examine the new role of Latin America’s military in domestic security.

Against the background of a security situation perceived as an exceptional threat to national stability, governments across Latin America have strengthened the armed forces to a degree hitherto unknown since the end of the Cold War. This project examines this comeback of the Latin American military. It is the first project exploring the challenges that this (re)militarization represents for public security and democratic governance in the region from an interdisciplinary and historically-informed comparative perspective.

The project assesses the historical dimension of militarized public security in Latin America and explores the current role of the military in the fight against crime and violence. In order to analyse the challenges for democratic governance which the latter entails, the project will bring together scholars from the fields of political science, history, and Latin American Studies. The project focuses on empirical case studies ranging from Argentina, Brazil, and Colombia to Mexico and the Northern Triangle of Central America (El Salvador, Guatemala, and Honduras). With the support of the OX-BER Research Partnership Seed Grant, the project team will, together with a broad range of experts in the field of civil-military relations and security politics, prepare a joint research program. It aims at developing a database on military interventions and a comprehensive research grant proposal in order to strengthen the cooperation between research communities in Berlin, Oxford, and Latin America.

The aim of the project is to assess the specific constellations of civil-military relations as well as regional patterns from a diachronic and synchronic comparative perspective. The project will provide innovative insights to the challenges, threats and opportunities that a redefined role of the military brings about for public security and democratic governance in the region. In order to do so, it addresses four main questions:

1. Why do Latin American citizens trust the Armed Forces, and what do they expect of the military?

2. Why and under what conditions do civilian policymakers rely on the military in the fight against violence and crime?

3. What consequences does the (re)militarization of domestic security have for democratic governance, rule of law, public security and human rights in Latin America?

4. How does this “comeback” of the region’s military affect the process of democratization in the region?